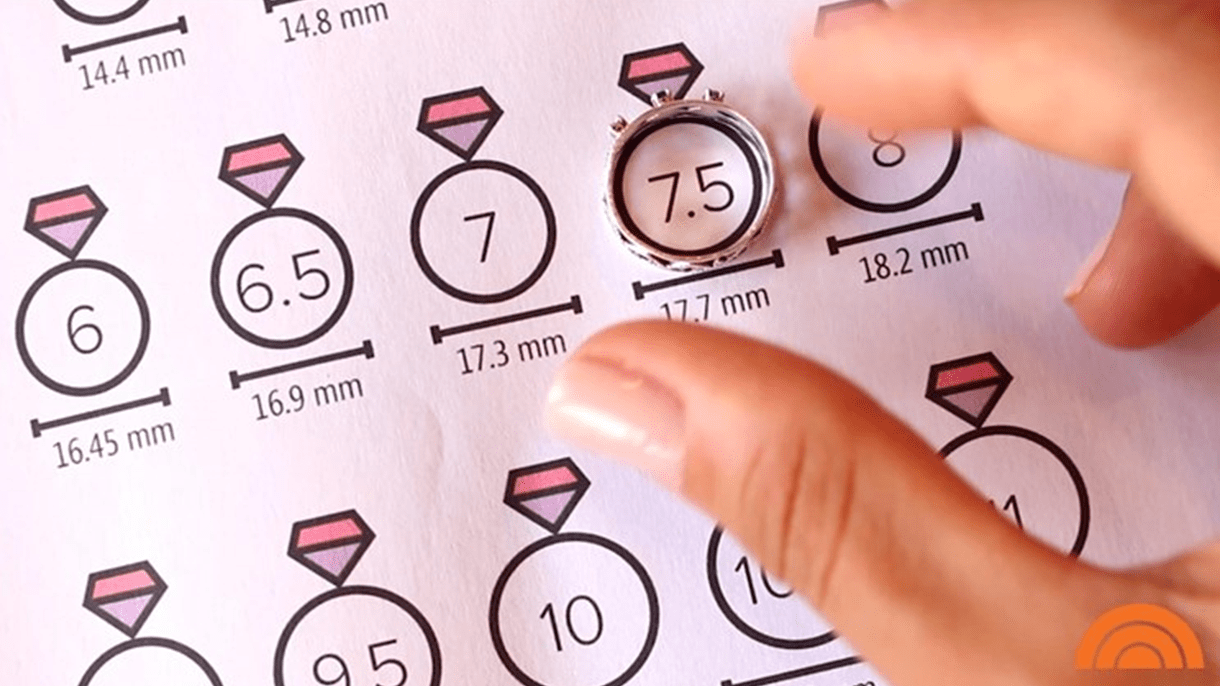 HOW TO DETERMINE THE PERFECT ENGAGEMENT RING SIZE

It goes without saying that your engagement ring serves as that life-long reminder of the commitment you make with your partner. The engagement ring will stay with you for days after your wedding has taken place, symbolizing the partnership between you and your spouse. Now imagine how gut-wrenching it would be to be stuck with a ring that means so much, but doesn’t fit perfectly on your finger. This is why it is imperative for you to gauge your accurate ring size before your husband/wife-to-be pops the big question.

We have provided you with this ultimate guide that shall help you determine your ring size.

THE BASICS OF RING SIZING

Ascertaining band fit might just be one of the most challenging aspects you’ll face when going through the process of selecting the engagement ring. This is essentially because there are various elements that influence the size and measurement of the fingers. Let’s comb through some of those elements:

In this piece we’ll be referring to the statements made by a credible source- Taylor Lanore who is both, a diamond consultant and engagement ring designer for Lauren B. Fine Jewelry and Diamonds. One of her claims are that temperature, diet, pregnancy, and various biological components can have an effect on your fingers. She has deemed the change in size of the finger to be a natural occurrence and not an abnormality that needs to be feared. It can happen due to your finger being engaged in some activity or other personal factors. If we’re being honest, there isn’t one formula that objectively works for everyone- everyone has undergone different experiences and follow a different lifestyle.

All human beings are built unique from one another, possessing different features and characteristics. Naturally, there are different kinds of fingers, and they have bearing over your ring size and fit. So, for example if someone has a tapered ring finger, a ring will fit into it perfectly at the very base as it is widest there. You need to ensure that the ring is comfortably placed where it’s not loose, otherwise chances are it’ll fall off as soon as it slides up. At the other end of the spectrum, some people have knotted fingers which basically means that their broadest part is the knuckle. This suggests that the ring will have a snug fit in this area because if it is worn at a varied position, it might be loose and uncomfortable.

A potential solution to this problem is getting sizing beads added to your stone. The tiny add-ons function as the pressure points that hold the ring in a fixed position. It is extremely convenient to put them on and remove them.

The manager of R&R Jewelers based in New York City, David Borochov, claims that rings with slimmer bands tend to run a bit larger. On the other hand, thicker rings tend to have a neater fit. The logic behind his statement is that when there is more metal that covers your finger, more space in taken up which makes the fit tighter. So, if you have made up your mind to get a thin, elegant band (currently in fashion), then choose a slightly smaller ring size.

HOW TO MEASURE YOURSELF?

There is a variety of at-home measurement techniques through which you can figure out the size (both, circumference and diameter) of your ring finger. Let’s take a look at each one of them:

Take a thin piece of paper and wrap it around your finger in an extremely close proximity to your knuckle where you expect your engagement ring to fit (an alternative method involves the usage of a string in place of the paper but it’s is unreliable as the string is likely to shift from its place). Make sure to not cover your finger too tightly; the makeshift ring has to be a comfortable fit. Take a pen or pencil to mark the exact area where the ends overlap. Once that’s done, all you have to do is measure the length of the paper with the help of a ruler and compare the measurement to the circumferences on the size guide for your ring size.

Print and cut out the ring sizer at the lower part of the size guide. Ensure that the guide is printed to scale by calculating the above diameters with a ruler for precision. Cut the slot marked towards the bottom of the sizer, fold it over the base of your left ring finger, and slide the sharp end through the cut. Softly pull until it fits properly. Check the number showed on the sizer for your ring size.

Take a ring that you already own that perfectly fits the ring finger on your left hand and place it against a ruler. Calculate the inward width of the ring and compare the measurement to the size guide. There is also another way to go by it. Print the manual for scale and place the ring directly on top of the ring pictures to track down a matching circumference and ring size that lines up impeccably.

HOW TO GET PROFESSIONALLY MEASURED?

You probably feel inept to carry out these methods accurately and doubt your own judgement. And that’s alright. You always have the option to consult a professional jeweler for a precise engagement ring measurement and get a professional’s opinion before you make a costly purchase. In any case Borochov states that the results you obtain from at-home techniques may be close to the accurate measurement but won’t be it.

Jewelers employ their own methods using a big keychain with a set of rings of all sizes that you can try on in-house. They then determine your size based on the ring with the snuggest fit. However, the types of sizing rings differ from jeweler to jeweler.

If you make it a point to buy your engagement ring from the same jeweler that sized you, then it would be an extremely convenient process. They would be aware of your exact measurements and can help you find the perfect sparkler that you always envisioned you’d get.

GETTING YOUR RING RESIZED

We’re all human beings and we can all make mistakes despite taking a hundred measures to avoid them. You have the option to alter your engagement ring in case it’s just one or two sizes off the actual measurement. However, wanting to make any more changes could potentially compromise on the integrity of the ring and you may just have to get a new custom band made by the jeweler.

Be extremely mindful when buying a diamond-studded eternity band- don’t make the purchase before your exact ring size is determined. Lanore has also reinstated this idea by stating that eternity bands can be resized around a quarter size up or down, under the condition that there is spare metal in the ring to make the desired adjustments. In most cases, they have to be recreated.

If you’ve gotten the ring fixed according to your size twice or thrice then it’s not a problem. But readjusting it for a greater number of times can be a bit of a problem. “Resizing up or down more than one full size is like an earthquake for the ring,” reports Lanore. He essentially wants to assert that frequent alterations ruin the metal of the ring and shouldn’t be encouraged.

It is also a common misconception that rings can be easily resized if they’re to be made smaller instead of larger. Borochov has defied this notion and claimed that both processes are possible as long as a competent and skilled jeweler is doing the task.

Nothing will break your heart more than watching the token of your shared promises slip off your finger and make its way down the bathroom sink. In order to prevent an untimely occurrence of this nature, make sure to follow the aforementioned tips to gauge the accurate measure of your ring size for your engagement ring.

We’ve shed light upon ways you can determine the precise size of your ring to save you from the impending doom (i.e., buying a ring that doesn’t fit) right before your engagement.

Understand this: knowing your ring size is not a guessing game you play days before your big day!